Why Trickle Vents Are Important for Double Glazing

Most window systems are compatible with trickle vents, and even if the window frame is not compatible, the vents can still be fitted to it independently. Some may want to improve the aesthetics of the window, and in this case a window board receptor can be installed.

These are compatible with most UPVC windows and provide an excellent look to the windows. Those who are still in the process of building their home should first ensure that the contractors hired have no problems fitting UPVC windows, before considering trickle vents or board receptors.

Let us get back to trickle vents however and see what some of the advantages of having them installed are.

It is well known that building regulations state that adequate means of ventilation is required in any home or building.

It is also well known that poor ventilation in rooms can have consequences on the health of those living in those rooms.

Proper air circulation is mandatory in all livable rooms of the house, as microscopic organisms contaminate the air, due to the moisture naturally produced in a home, as well as mould that starts forming from condensation. 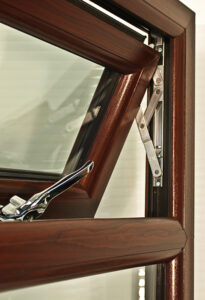 Living in a mouldy room where the air is contaminated with dust mites and other microscopic organisms is a major health issue.

Proper ventilation is the only way to prevent that from happening. Such microorganisms can lead to lung conditions, depression, and even heart conditions, if left unchecked.

Opening the windows regularly is a good way to ventilate, and sometimes the only way to ventilate for those who do not have trickle vents yet have sealed windows that prevent air from entering the room.

Previously, before sealed windows became common in most homes, ventilation was provided by the tiny gaps present between window frames and the building structure. Since that is no longer the case, a trickle vent is an excellent ventilation solution. These are usually placed at the top of the window frame and can be controlled.

This means they can be opened to allow fresh air in and polluted air out, or they can be closed. That sounds just like a regular window, but the advantage is that the vents can be left open at all times, even when away on holiday, as opposed to windows that should be closed when the house if left empty.

Even those windows that have a night latch should be closed at night or when the house is empty for longer periods of time, due to the security risk they pose.

Also, unlike a regular window, a trickle vent does not contribute significantly to heat loss. That means it does not really matter if it is left open at all times, because the difference in temperature is negligible. There are no disadvantages from installing such a vent to the window frame, and they can even be made to work along mechanical fans, for when more ventilation power is needed.

With a long list of important advantages such as improved security, reduced health issues, and reduced heat loss, trickle vents are certainly something worth considering.

Most UPVC windows are compatible with them, and good trickle vents have an excellent design and are completely unobtrusive. Your first step should be to compare the best double glazing windows online

Since building regulations state that proper ventilation is required in liveable spaces, such vents are not only the cheapest solution, they are also the easiest to install. Just about any window board should be suitable and installing the vents should not be complicated for good contractors. As long as they know a thing or two about fitting UPVC windows, they probably also know how to install a trickle vent.

Remember that proper ventilation can truly be a life saver, in some cases.